Benefits for mind, body, relationships and the environment

Maharishi Mahesh Yogi, who founded TM, was always keen to present it in a modern idiom, and strongly encouraged scientific research. The fact that TM is taught in a standardized way around the world has opened it to scientific investigation, and papers have been published in journals such as Scientific American, Hypertension and The Lancet. Starting as early as the 1960s, scientific studies have been published on the effects of TM on:

Below are some highlights of this research. You can also download a one-page summary of research on TM and health, and download a full overview of all major studies on TM.

A study of heart patients found that during a 5.4-year followup those who were randomly assigned to the Transcendental Meditation program decreased by 48% on a composite of heart attacks, strokes and death compared to health-education controls. This was a 9-year, NIH-funded, Randomized-Controlled trial.
Circulation, Cardiovascular Quality and Outcomes 5, no. 6 (2012): 750-58 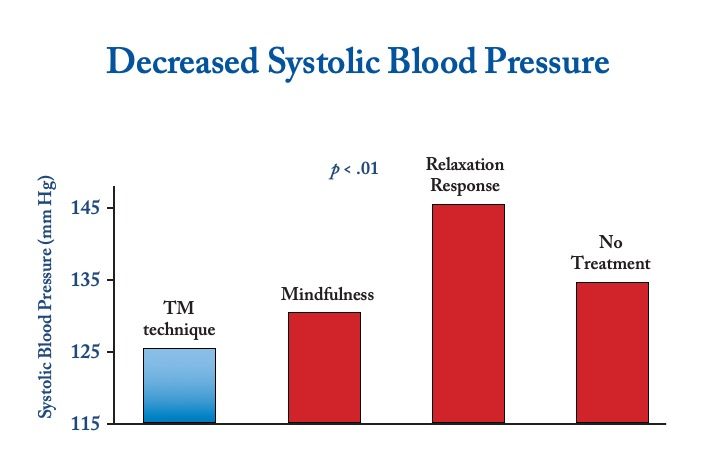 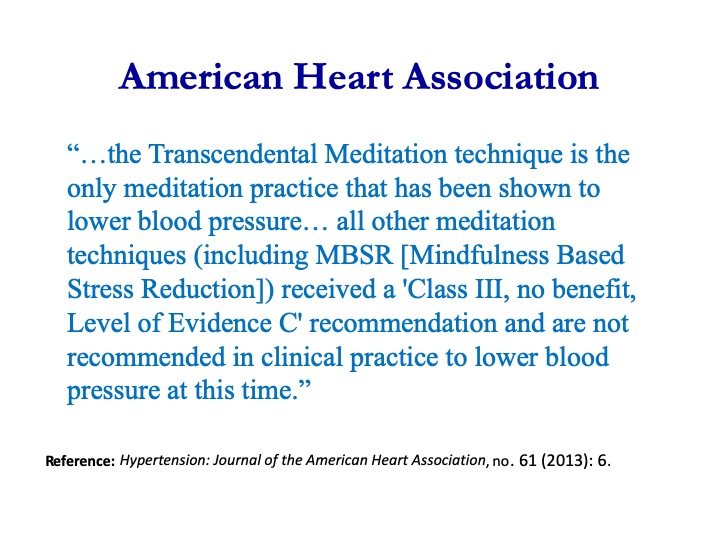 On the basis of a review of the meta-analyses and high quality studies, the American Heart Association concluded that TM is the only meditation practice that has been shown to lower blood pressure. All other meditation techniques (including Mindfulness) are not recommended in clinical practice to lower blood pressure at this time.” 3 The AHA statement concluded that alternative treatments that include the Transcendental Meditation technique are recommended for consideration in treatment plans for all individuals with blood pressure > 120/80 mm Hg. 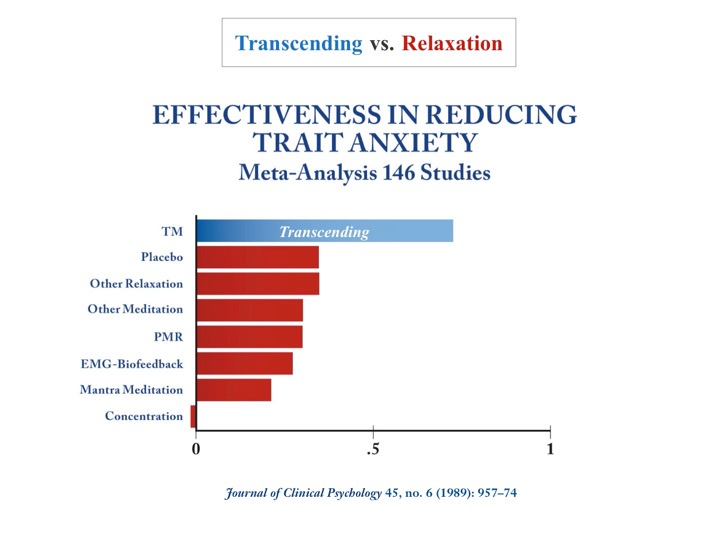 This is a major meta-analysis from Stanford University of 146 published studies (the complete literature of published studies on meditation and relaxation techniques at that time). Note that all techniques in this study except for TM are comparable to placebo, which in this study was eyes closed rest. This doesn’t mean they are bad or ineffective—just that they’re no more effective than eyes closed rest. TM was markedly more effective than other techniques at reducing “trait anxiety”—the scientific term for baseline stress. Journal of Clinical Psychology 45, no. 6 (1989): 957–74. 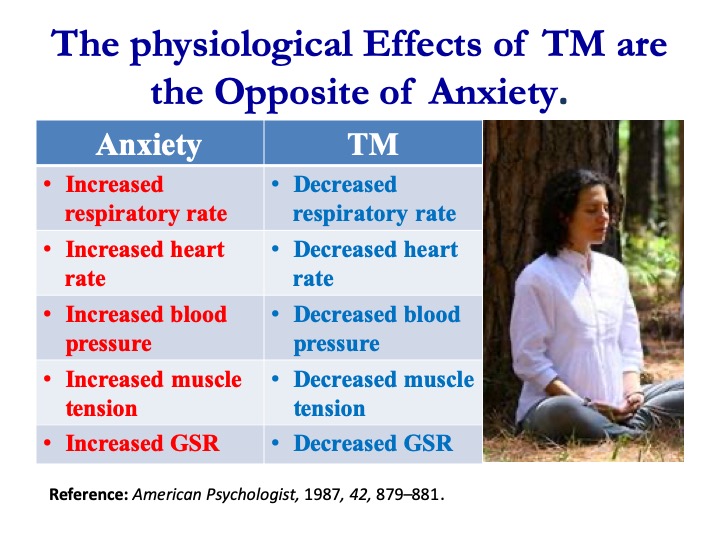 Anxiety is part of the Flight-or-Fight response. The physiological response to threat is to activate the body’s resources to meet the challenge by raising the respiratory rate, heart rate, blood pressure, muscle tension, and to increase sweating (GSR) to cool the body. Problems arise when the fight-or-flight response is activated too frequently or for too long, fatiguing the body and making it susceptible to disease.  The Transcendental Meditation technique has just the opposite effects on the physiology as anxiety. It decreases respiratory rate, heart rate, blood pressure, muscle tension, and GSR, providing the body deep rest that restores health and prevents disease. Dillbeck, M. C., & Orme-Johnson, D. W. (1987). Physiological differences between Transcendental Meditation and rest. American Psychologist, 42,
879–881. 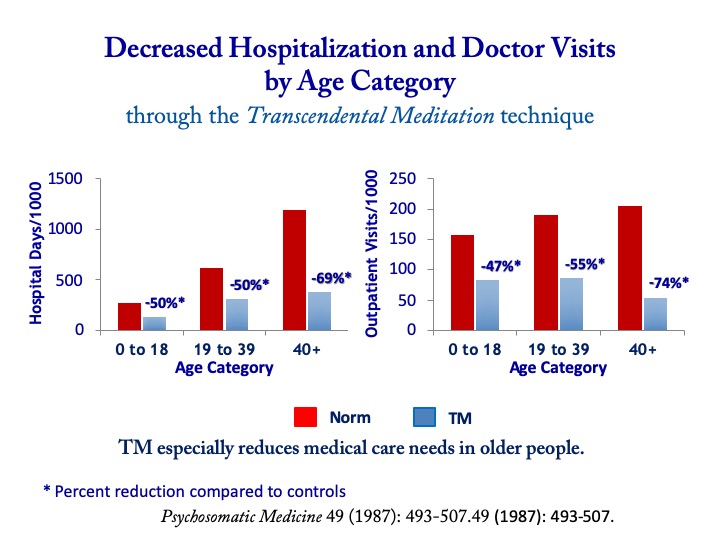 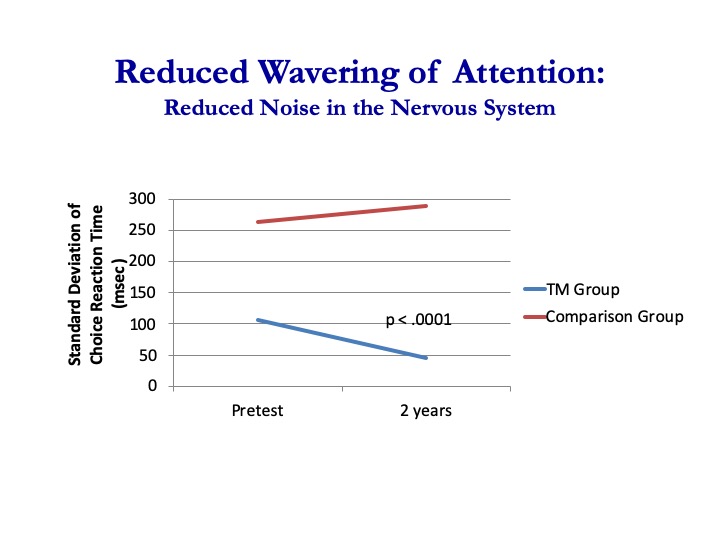 This study not only found that TM increases fluid intelligence and improves choice reaction time, but it also improves attention. Reduction in variability of reaction time indicates improved attention. The study found that the meditator group had much better attention (less variability) to begin with than the comparison group and improved even more over the two years of the experiment.